It began the way most holidays begin. A map, a cup of coffee and a pocketful of half imagined destinations. The ideal half imagined destination in question had to be between 20 and 30 degrees Celsius in darkest January. So Iceland, Canada and most of Northern Europe were straight off the list. Did I also mention it had to be an island? And that it had to be full of beaches, underwater life and local colour? That it had to be environmentally aware, accessible and speak English, or German at a push.

And most importantly that it was safe for pregnant ladies. (me! That’s why we’re calling it “the Last Holiday” – our last holiday as 2 people before the inevitable bags filled with diapers.) So with this rather epic list of criteria, we went to work. Matt drank the coffee, and I searched the web. I found several blogs and discovered that the Seychelles fit our requirements just about to a tee. We were teetering on the rainy season by visiting in January, but we took the plunge. We booked our flights immediately.

Looking back we maybe took that plunge a little too quickly. I say this because I am currently typing this from a small hotel room in Addis Ababa in Ethiopia during our 14-hour layover as part of the return trip. Well, that’s what happens when you don’t read the fine print. Or you know, the return timings. I blame the hormones (and Matt).

So that’s a bit of a long lead in. Let’s talk about our lovely 10 days in the Seychelles. 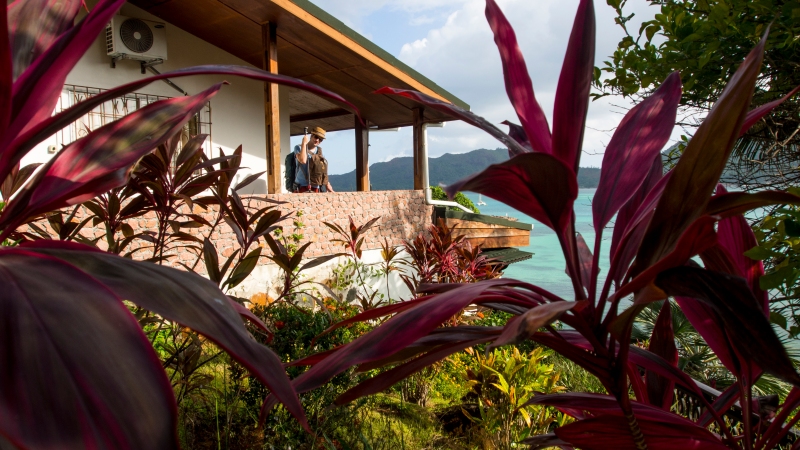 The Seychelles are the only granitic islands in the middle of an Ocean… meaning they’re not so much islands as they are the mountaintops of an ancient continent long since drowned… Not that anyone remembers that bit. Now it’s filled with turquoise water, stunning beaches, giant tortoises and mythical giant seeds (also known as Coco de Mer – the fruit of the Ocean). There are only about 86,000 people living in the Seychelles and that number swells by around 150,000 visitors each year. (seemingly from France and Germany) That’s less visitors than the Tate Modern gets in two weeks! So from our perspective, there weren’t a lot of people around. Which is just the thing your want from an island escape.

In the past 10 days we have set foot on 8 of the Seychelles’ 155 islands. I like to think we made a dent, however miniscule.

We started on the largest island, Mahe. It’s home to 86% of the country’s total population and has the smallest capitol city on Earth, Victoria. It was named after Queen Victoria, then head of this little British colony in the middle of the Indian Ocean… but like all good things it started French, at least until the British took it from them. There’s even a little ‘Big Ben’ painted silver in the middle of the main traffic intersection, so nobody can forget that fact. We chose to stay on the other side of the island, in a beach house called ‘La Clef des Iles‘, right on Beau-Vallon beach. It was a great lead-in to this amazing holiday. 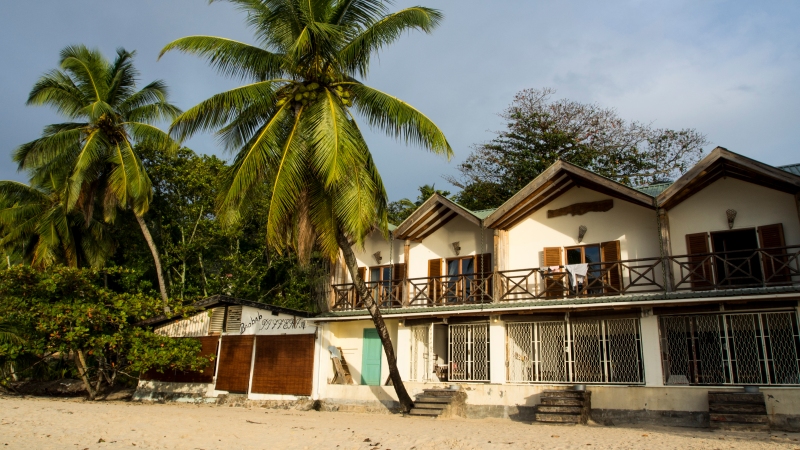 Then it was on to the second island of our voyage: La Digue. So small, that they don’t even have cars (okay maybe a few cars, and one or two ox carts). Everyone cycles everywhere. It was like Amsterdam, but with more sun. And beaches. 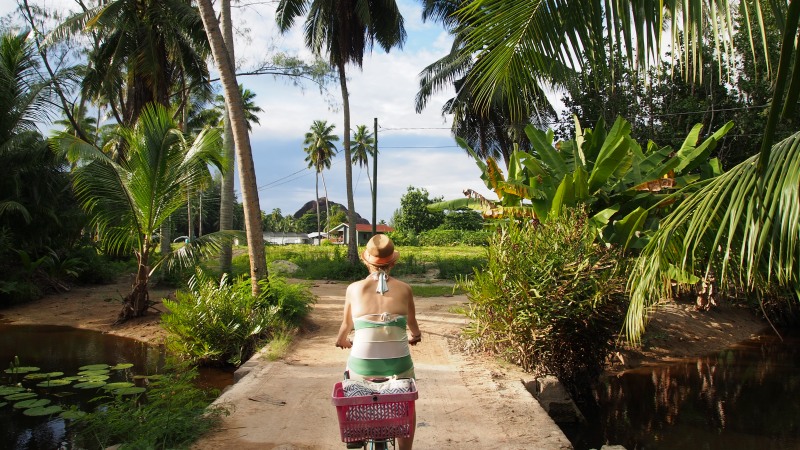 This island is the one most people know from the postcards. It has some of the most spectacular beaches with weird monolithic rock formations I have ever seen. Great for photos! And often completely empty. The most famous one is “Anse Source d’Agent” – the one from the aforementioned postcards. If you want that postcard view, go there after 4.30 PM when all the other tourists have left and you’ll be completely on your own. Also note, it is part of a national park and they charge an entry fee of 100 Rupees. So don’t be surprised if you are stopped at the gate. 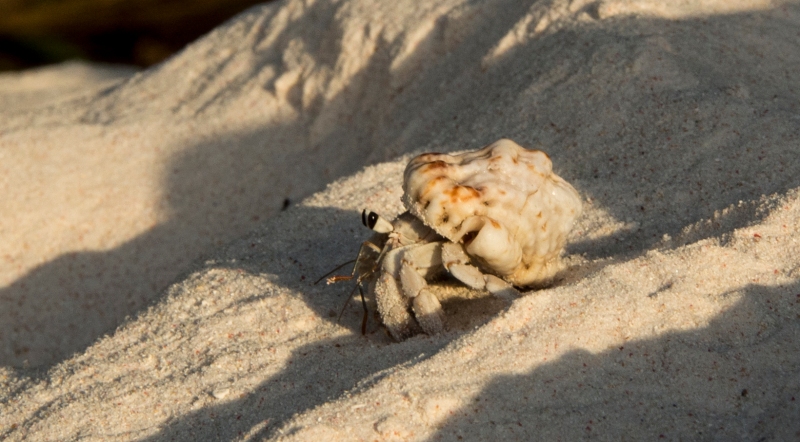 Remember we were looking for a safe holiday destination. Well, I can’t really say that the ‘roads’ were hugely safe… if you can even call them that… particular on La Digue. It was more or less small paths with very steep cliffs on each side and no safety fence or anything. Also no lights whatsoever at night, so that meant after dark (7.30 PM) we basically stayed at our hotel – Patatran Village hotel (a recommendation). That’s when we got talking to the hotel owner who recommended some local delicacies: Bread fruit (once you eat it you will come back to the Seychelles – kind of like throwing a coin into Trevi Fountain in Rome.) And of course the ‘orange breasted fruit bat curry’. Not for the squeamish. We also learned a very good spider related saying. In the Seychelles you are ‘lucky like a spider’. Which sounds weird until you see the freaking giant palm spiders with their massive webs full of delicious fallen bugs. The spider itself is a thing of nightmares and as big as a hand.

Our highlights on La Digue were definitely the snorkelling tours to two magnificent and seemingly untouched private islands (Sisters and Coco Island) where with the help of our guide Ramley we found and swam with Turtles for the very first time! I felt a little bit like a pregnant Robinson Crusoe as we barbecued jackfish on an empty beach, and fed batfish from the palm of my hand. (videos to follow) 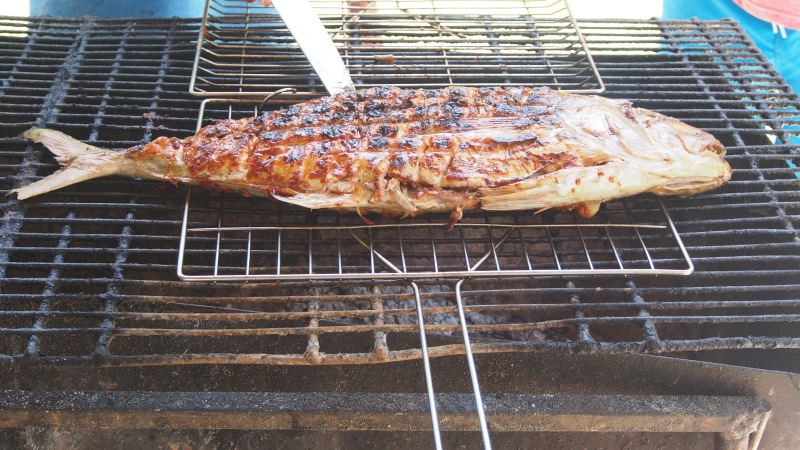 What we also learned from our hotel owner is that it is a Seychellois tradition to give a baby Giant Tortoise to a newborn as a pet. In the olden days the other part of this tradition was to eat that same Tortoise on the wedding day. This is thankfully not practised anymore which means they are just growing old as part of the family and sometimes even block the roads. 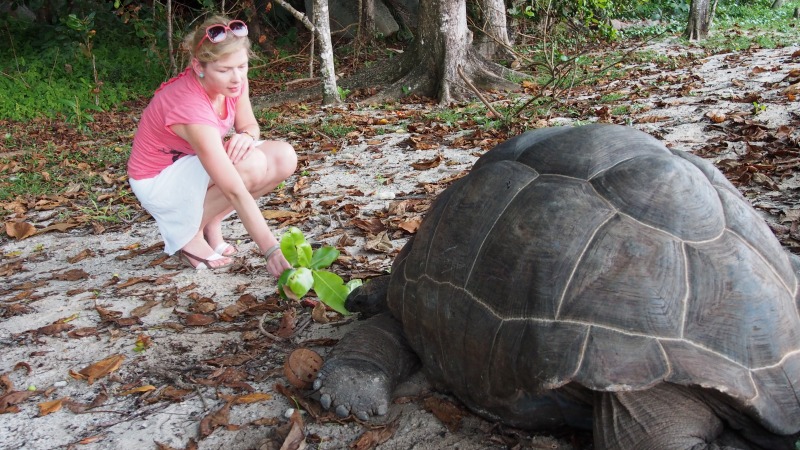 From there, it was only a short hop over to Praslin, home of the giant seed I told you about earlier, only found on this island in the Vallée de Mai Nature Reserve. It was also claimed to be the “Garden of Eden” by General Charles George Gordon of Khartoum, probably due to the Coco de Mer seed and flowers looking very much like a man and a woman’s unmentionables. They were very creative back then, but I guess it worked, and the jungle is now Unesco World Heritage protected. 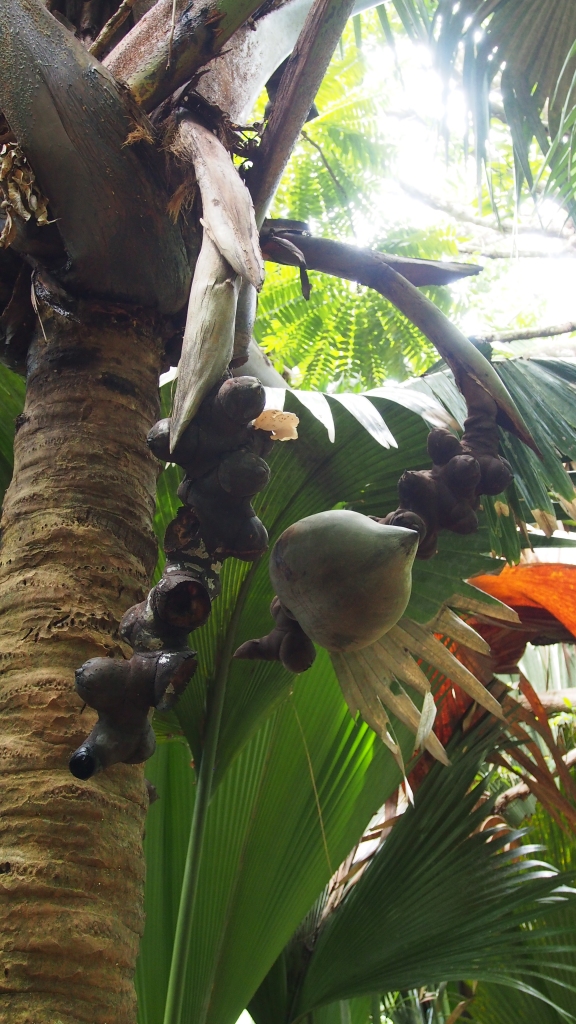 Praslin also has some of the steepest roads I have ever seen. (San Francisco is nothing in comparison) And that proved a challenge especially when the rainy season finally arrived all at once. Like driving up a waterfall. But the Seychellois were very laid back about it, “oh it’ll go out with the tide” they’d say. Or “It’s just a little shower.” Yeah right. But it did clear and we found ourselves in some beautiful settings, including a lovely national park, former leper colony, and turtle sanctuary, called Curieuse Island.

I even made some new friends there.

Then it was off to our last island paradise, a little island retreat called Cerf Island, just 4 km off Mahe for some kayaking.

The heavens opened as we made our way to the airport. I guess they rain season had decided to wait until we left before getting down to proper business. And we couldn’t be more grateful.

The last holiday has left us refreshed and ready for all the new adventures we are about to embark on this year. And now all we have to do is wait for it all to start. 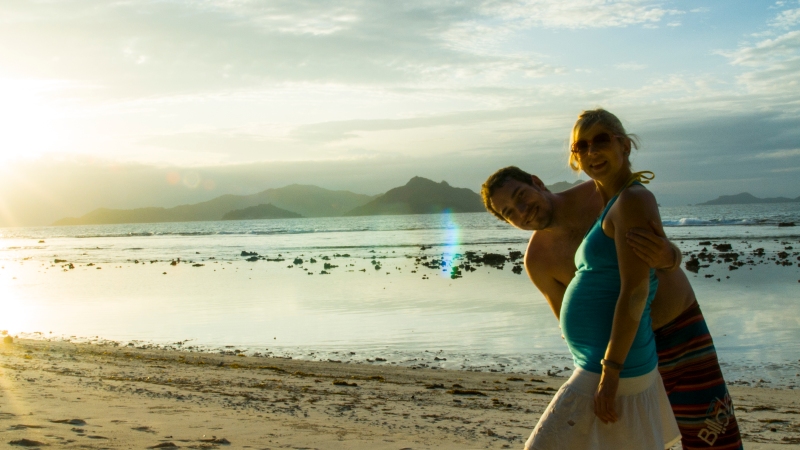