Beginning of this month we went to a rather unusual holiday destination, especially for parents of a toddler. Israel! We went for a wedding, but stayed for the ancient history and the Dead Sea! And also the beaches. Never forget the beaches.

Israel is a country of opposites. A country where the old and the new are nestled uncomfortably beside each other.

It’s hard to come here and not mention religion, so let’s get that out of the way quickly. The holy land is like a theme park for religious people. On the Christian side you have the Church of the Holy Sepulchre in Jerusalem. It is regarded as the holiest site of the Christian religion where it is believed Jesus Christ was crucified and buried. On the Jewish side, you have the Wailing Wall, and on the Muslim side you have the Dome of the Rock. And of course these 3 incredibly holy places for these 3 massive ancient religions are all right on top of each other. Literally in one case. It beggars belief that one place could hit the monotheistic jackpot 3 times. But in all seriousness, this very fact has caused division for thousands of years and is still the route of all the problems in this country.

But all three are pretty darn beautiful in their own way:

The Church of the Holy Sepulchre

The Tomb of Jesus

The Dome of the Rock

Amelie saw the pilgrims rubbing the stone where Jesus was anointed, and of course wanted to get in on the action. I think this means she blessed herself? But we can’t be sure.

One thing that is for sure is that the hotel we chose was a blessing! The Market House Hotel in old Jaffa was simply awesome. Great staff, great location in the middle of Jaffa flea market and built above an Byzantine chapel with glass floor tiles to prove it, great interior decorating and with an amazing breakfast. Plus every afternoon from 5.00 till 8.00 was happy hour with free drinks and nibbles!

I guess that round about gets us to Tel Aviv, a modern metropolis on the edge of the desert. Distractingly different from the historical tangle of Jerusalem. It took us a while to peel away its grimy shell and find the magic that the locals speak so much about. We always seemed to pushchair down the wrong streets!

That is until we found the winding Shabazi St. in Neve Tzedek neighbourhood. A wonderful little street full of boutiques and art shops selling everything from cloth giraffes to wizard hats. Which we of course brought back with us. 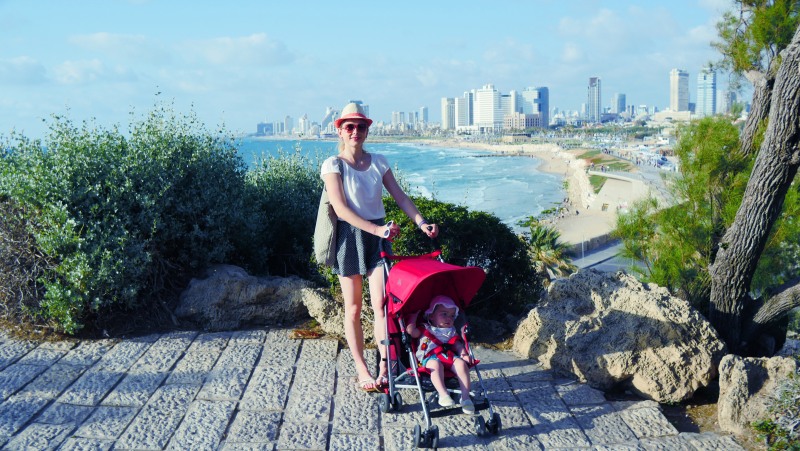 The old Jaffa Port was a lovely discovery for us too, full of very old fishing boats and you could see history spanning over three millennia in its winding alleyways.

Here we found an amazing family style fish restaurant called “The Old Man and the Sea“. You sit down and what feels like 100 dishes are placed in front of you (this is before you even order!) including the most delicious fresh lemonade. And if you dare to finish a plate, you should make sure you want more as it gets refilled instantly! Amelie loved the parade of dishes and even approved their German sausages on the kids menu. 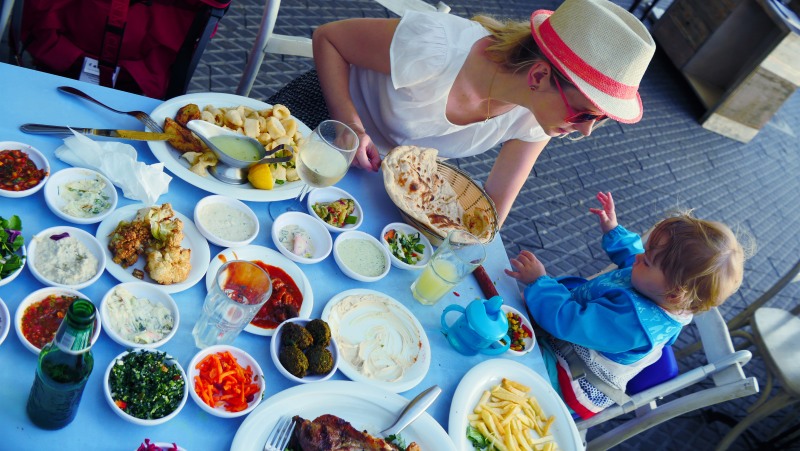 Travelling with a toddler is tough even on the easy days. So having so many beaches to crawl and splash around in was amazing. At Jaffa Beach Amelie met the sea properly for the first time and of course, she went in butt first. Her motto: When in doubt always reverse! 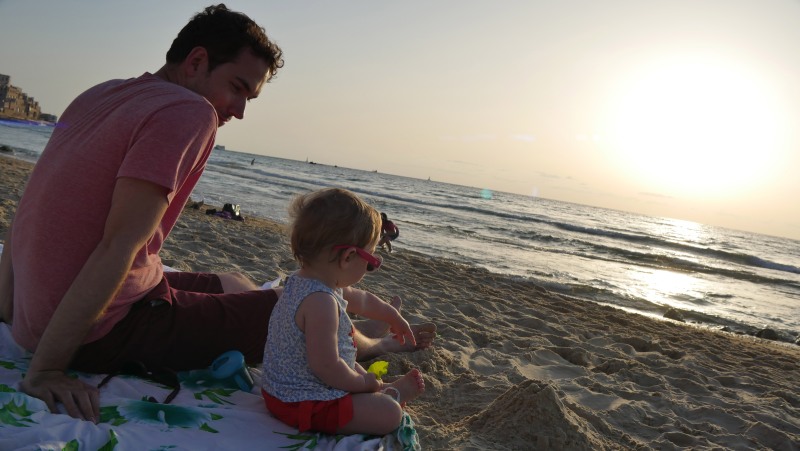 On our final day we visited the Dead Sea, 400m below sea level where apparently you get more oxygen than normal and it’s harder to get sunburnt… All I know is that if you have any mosquito bites they will sting like a thousand suns in the salty water. But still… A pretty cool feeling.

Our journey to the Holy Land was certainly eye opening. I learnt a lot about religion, beduion matriarchal society and Jewish weddings. I would recommend it. Also a great source of information about Jerusalem is this graphic novel by Guy Delisle who illustrated his year of living there. A must!